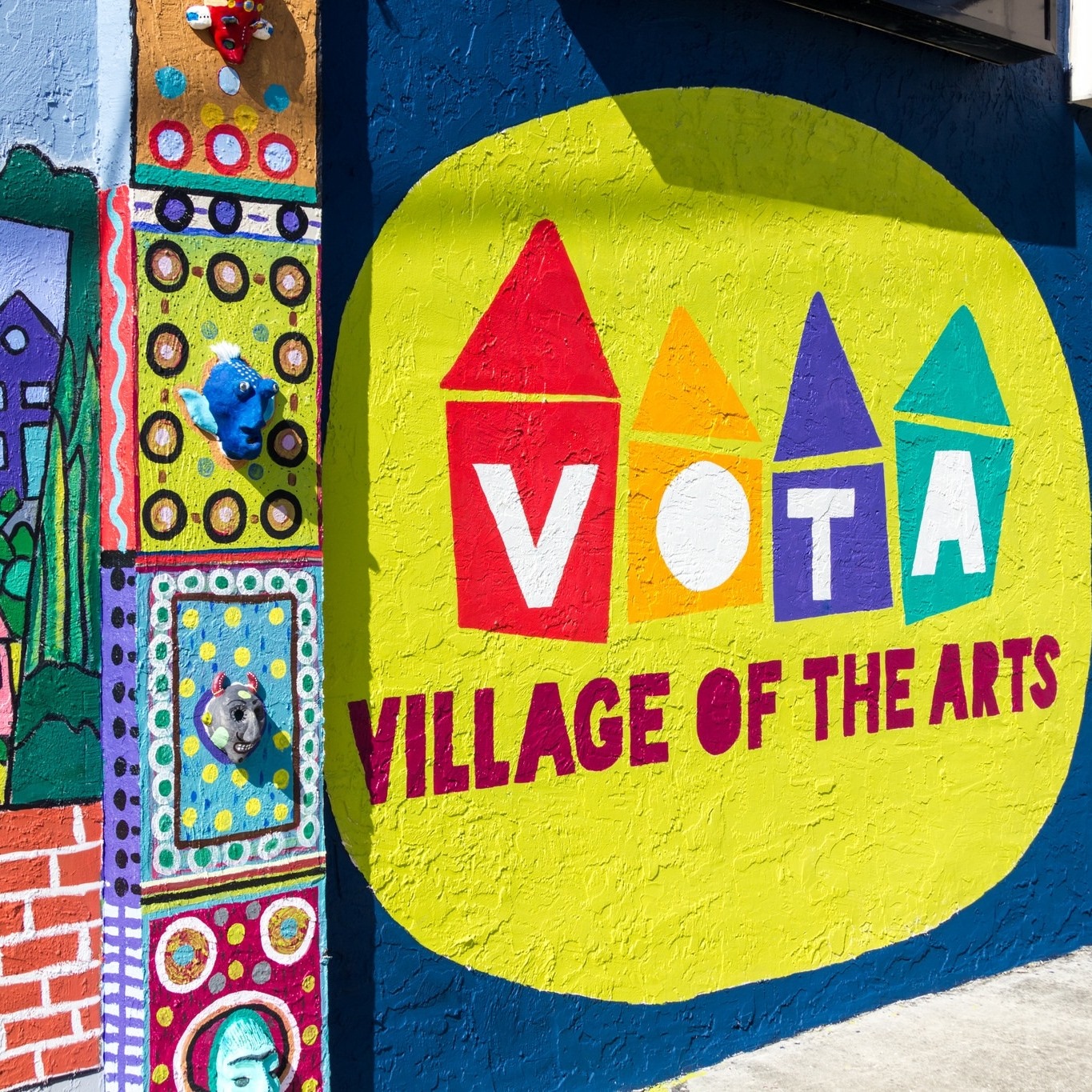 The largest artist community in the state of Florida is in little ol’ Bradenton. Just steps from downtown historic Main Street, a little farther south on 12th Street across Manatee Avenue, is a hidden oasis of art and music, cafes, and restaurants. It is an entire neighborhood dedicated to the arts and its creators.

In this quirky Village of the Arts, yards are adorned with colorful sculptures while sidewalk murals guide you through blocks of shops and galleries where artist-residents have created Bradenton’s Arts District. Here, they live a life of which most only dream. Mixed-use zoning allows residents to operate businesses out of their homes, and these artists and makers inhabit nearly 300 properties spanning over two dozen blocks that are known as “the Village” or simply the VOTA.

The Village has everything bohemian, nature-loving, peace-seeking, old-punk, neo-hippy, entrepreneurial creative-types could ask for. Quaint cottages from the 1920s and 30s have been renovated into brightly painted studio spaces and stores to fill almost any need. Those who live and work in the VOTA are self-reliant visionaries who have taken years to develop a community that is purposeful, progressive, and part of the city’s larger plan.

“I knew from the first time that I came to the VOTA that I had found my niche,” Kristen Anderson, who operates a hair-dreading business on 11th Ave West, said. She added that the move to the Village has been nothing short of life-changing for her. “I found a community of like-minded people creating art and working on personal growth.”

Today, the VOTA has become a must-see tourist destination and it has gained national recognition for being a successful arts community. Art Walks that take place the first full weekend in each month regularly fill the sidewalks with art-lovers and looky-lou’s. Open mics, live music, and pop-up shopping events occur weekly.

You can find tacos, a vinyl record shop, a yoga studio. A country store sells produce from a stand on the corner as music fills the air. You can get a tattoo, go gem mining, and have your chakras aligned all in one trip. But most importantly, it is the people who live and work in the Village making it all happen.

Before the Village became what it is today, a small group of like-minded individuals came together with a vision for a new, intentional neighborhood. One that would provide opportunity and enrichment for the community. In 1999, the Artist’s Guild of Manatee County officially founded the Village of the Arts. Since its inception, the blighted area of dilapidated homes has transformed into Florida’s largest artist colony. It is even now supported by the city’s Downtown Development Authority and performed its very own sociological impact study on the strategic growth they call “creative placemaking”.

Douglas Holland owns Jerk Dog Records on 12th Street West, the area’s premiere vinyl record shop and frequent host of live local music. He and his wife, Valarie, who created the Bradentucky Bombers roller derby team, are some of the first residents to be involved in forming the VOTA.

“At the time, I don’t even remember if there was a name for it,” Holland said. “It was just this economically deprived neighborhood with a lot of crime that had special zoning.”

But he and Val saw the potential it offered and bought a fixer-upper that would later be home to Valerie’s former art studio where she conceptualized local art group, Edge, a thriving record business, and nest to their first-born child. “It didn’t take long before more people moved in and fixed up some of the abandoned and dilapidated places and our street really became the center of the VOA pretty quick,” Holland said.

“I love raising a kid here,” he added. “Our neighborhood is tight knit and we watch out for each other.”

Though things have changed since Covid hit last year. Jerk Dog Records no longer hosts live music during Art Walks, and they must limit the store capacity to only three people at once. Holland even had to cancel his notorious Record Store Day, the busiest national event for vinyl shops everywhere.

Having survived over 20 years now, through multiple hurricanes, economic recession, and now a pandemic, the Village of the Arts is a leading example of what happens when creativity and ingenuity merge over zoning meetings and master plans. Without the unlimited imagination and stubborn determination of artists and rebels, neighborhoods don’t get planned or survive like this one.

In addition to the Covid pandemic, the Village soon faces another potential threat, and how the community is able to navigate it will determine its future. A development of high-rise apartments is slated to be built along 14th Street in the next year, which poses a serious influx of traffic and people that the small Village is not equipped to serve.

Gene Tenery has lived in the Village for 10 years now, witnessing much of the neighborhood’s ebbs and flow. His interest in relocating to the village was sparked by the opportunity to run his knife and tool sharpening business from his home and later an art studio, where he currently resides. Although he has permanently closed his business due to Covid and new interests, he is troubled by the proximity of high-density apartments to the Village.

“I believe the Village is not the ‘destination’ that many people want to believe it is but a community of neighbors, with some that are very creative,” Gene said, adding that the big changes coming from the development may negatively affect the area he calls home.

Kristen Anderson feels hopeful that the strength of the VOTA residents will prevail.  “We are not exempt from the realities of recent health concerns and life here has changed as it has for all small businesses.” But, she says that Village residents come together in times of need and they have found new ways of expressing their art as they adapt to a changing business climate.

“We find ways to make statements with new boundaries,” she said. “When one of the community is facing a challenge, everyone does their best to help.” She added that it’s not unusual to find neighbors distributing food from local food banks and delivering home cooked meals.

“It’s a VOTA custom to barter for goods and services and to share freely with each other,” Crosssaid. “This is the approach that has kept us reaching out through art, music, and food and translating our actions into loving connections.”